Radon has become more of a mainstream topic in both residential and commercial real estate and construction in Minnesota and across the country. This is both due to new building code requirements that say a passive mitigation system is needed in homes built June 1st 2009 and after.

In this article, we will discuss the reasons Radon gas has the potential to cause lung cancer to people living in homes with elevated levels of this deadly gas.

A BRIEF INTRODUCTION TO RADON:

Radon is an invisible, colorless, and odorless gas that can’t be detected with typical equipment and requires a specific test that you can buy and mail into a lab, or have professionally done as part of a real estate transaction. 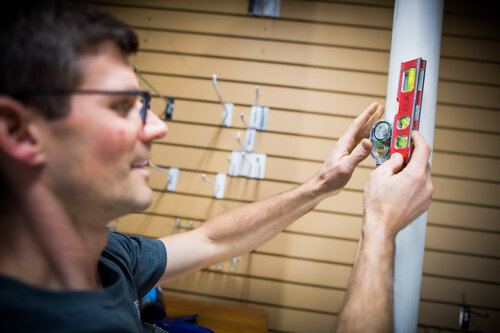 It all has to do with the radioactive nature of Radon and it’s decay products. This means that every time Radon goes through what is called a decay every 3.8 days, an alpha particle is released from the Radon when it turns into Polonium.

These alpha particles are mostly harmless outside of the body. They can travel 2-10cm (0.75 – 3.9 inches) through air and are stopped by a sheet of paper or a layer of skin.

When this decay happens inside of your lungs, your lungs are being harmed by this particle from close range. Some people think that gamma radiation is the most harmful and dangerous thanks to some Hollywood movies.

Alpha particles are actually more dangerous inside of your body and are commonly referred to as the wrecking ball or bowling ball inside of your lungs. Long-term exposure to Radon and its decay products can cause lung cancer.

As mentioned before, when Radon breaks down and a decay happens it becomes another radioactive element. The first one down the line that isn’t Radon is Polonium.

Once inside the lungs, the alpha particle from the decay of the radon did its damage and the Polonium gets lodged in the lining of the lungs.

That Polonium is in the lining it isn’t going anywhere. It remains there until it also undergoes a decay like the Radon did, and also releasing an alpha particle. These radioactive decays from Radon and the Radon decay products (RDP’s) that release alpha and beta particles damage the lung cells and their function.

This cycle from living in a home with elevated radon levels is constant, and is the reason why Radon testing and mitigation is necessary.

WHAT ARE MY CHANCES OF GETTING LUNG CANCER DUE TO RADON EXPOSURE?

This depends on several different factors. The primary three are if you have ever been a smoker, lived in a home where you breathed in second-hand smoke, and are a never-smoker who has never touched a cigarette?

When it comes to the number of cases of lung cancer every year, Radon is responsible for 10% of the cases in the United States, second only to smoking.

For some, it’s hard to understand how dangerous Radon is since its invisible, colorless, and odorless. As a general comparison, the Radon measurement obtained in a building can be doubled and that is roughly the equivalent of smoking that many cigarettes per day.

Let’s say a Radon test result came back with a result of 4 Pci/l (picocuries per liter of air), that would be the same as smoking eight cigarettes per day.

If that doesn’t resonate very well, it is also the equivalent of getting about 200 medical X-Rays in a year.

Even if your level was 2 Pci/l that is still like smoking four cigarettes per day! This is why when we are asked what the safe level of Radon is we reply: “NONE!”

WHAT IS THE EASIEST WAY TO DETERMINE YOUR EXPOSURE TO RADON IN YOUR HOME?

The easiest way to check the Radon levels in your home is to get a Radon test kit. These come in different shapes and sizes, but they aren’t very expensive and are easy to set up.

We sell two kinds of testing options on our website. The first and recommended option is the Air Chek test kit.

This is a test that we recommend you setup on a Thursday then ending and mailing the test back to the lab on a Monday. This allows for a 4-day test, which will give you the best results.

For the Radon test results, you will receive an email from us with a report of your test results. On top of that we also offer a phone call to discuss your results and any further steps that may be needed.

The second option if you prefer to know the results across a rolling average for the day, week, and long term is the AirThings Home Radon Gas Detector.

Check out the products below for the two types of Radon monitors listed above!