Is It Time To Replace Your Radon Fan? | American Radon Mitigation
September 10, 2021

Is It Time To Replace Your Radon Fan? 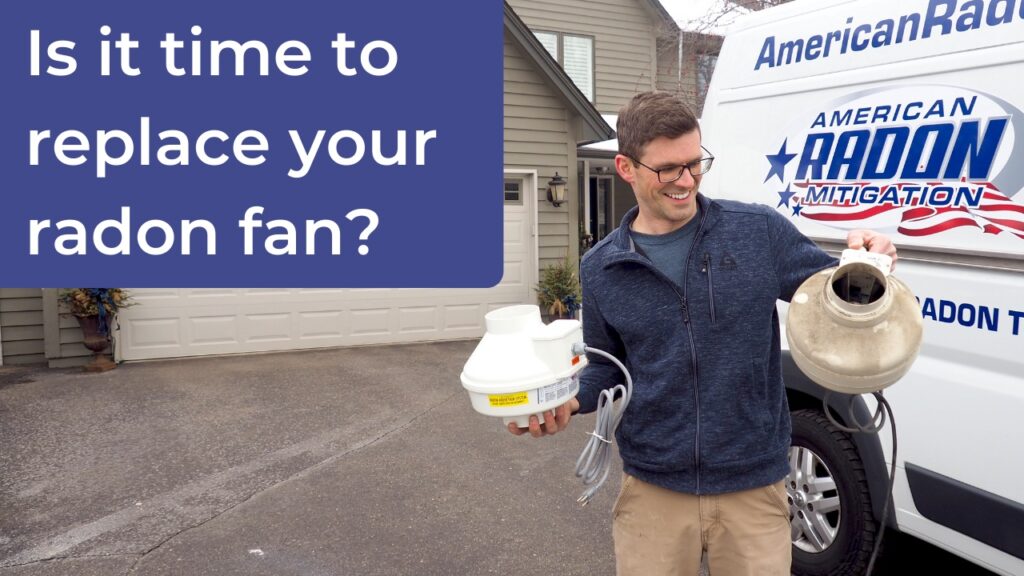 Is it time to replace your radon fan? Like any component with moving parts, radon fans have a service life. In this article, we’ll discuss how to know when to replace your fan, address some common problems that you may be able to fix yourself, and walk you through our process for replacing a radon fan and optimizing an existing radon system.

HOW DO YOU KNOW WHEN IT’S TIME TO REPLACE YOUR RADON FAN?

Another sign that you need to replace your radon fan? Your old one stops working! You can tell that your radon fan is no longer operating when your system’s alarm goes off or your manometer is level at zero, as shown below.

However, don’t call your mitigator quite yet. There are several reasons your manometer or alarm might indicate a problem, so here are a few things to consider before setting up a fan replacement:

If you’ve checked all of the above and haven’t found the source of your problem, it’s time to give us a call.

REPLACEMENT AND OPTIMIZATION OF YOUR RADON FAN

When you come to us for a fan replacement, you have some options. We can replace your fan with the same or equivalent model, but we also encourage customers to optimize their entire system to ensure it’s up to code and working effectively.

To give you an idea of what that looks like, we’ll take you through our process to optimize a system in a Minnesota home. This customer called us because their fan was making a lot of noise. Not surprising, considering the fan was installed in 1995! The customer elected for full optimization, so in addition to installing a new fan, we also added a system alarm, sealed the sump basket cover, and performed pressure field extension testing.

We started by replacing the old fan with a Fantech Rn2EC, which has a potentiometer inside that lets us adjust the fan’s power. Fine-tuning the fan’s settings allows us to achieve sufficient suction while also conserving energy and reducing operating costs. We will dial the fan to our preferred setting later on in the process. 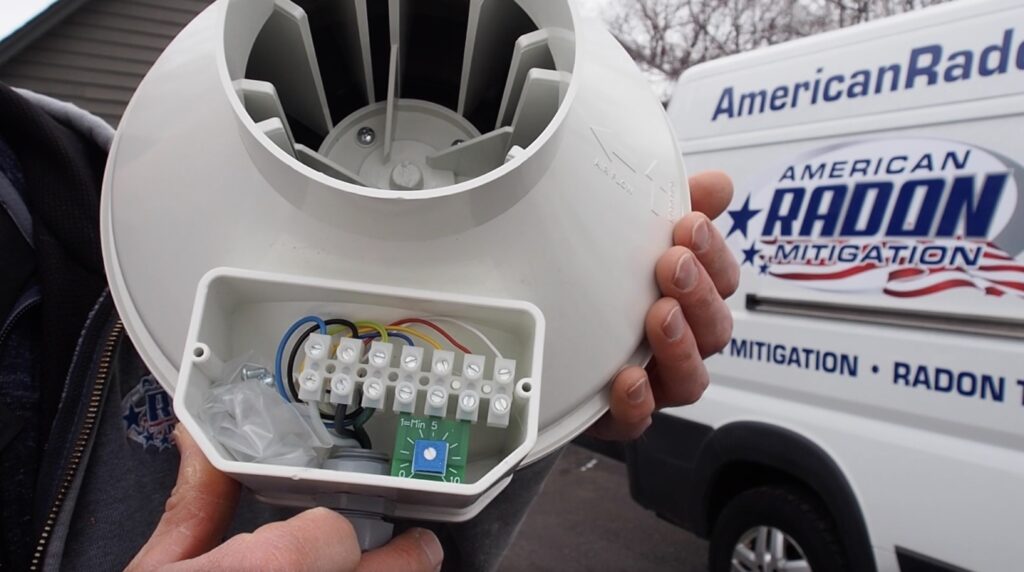 Once we installed the fan, it was time to make some updates. We began by mounting an alarm to audibly alert the customer of a fault in the system. Alarms are now required by code in Minnesota. 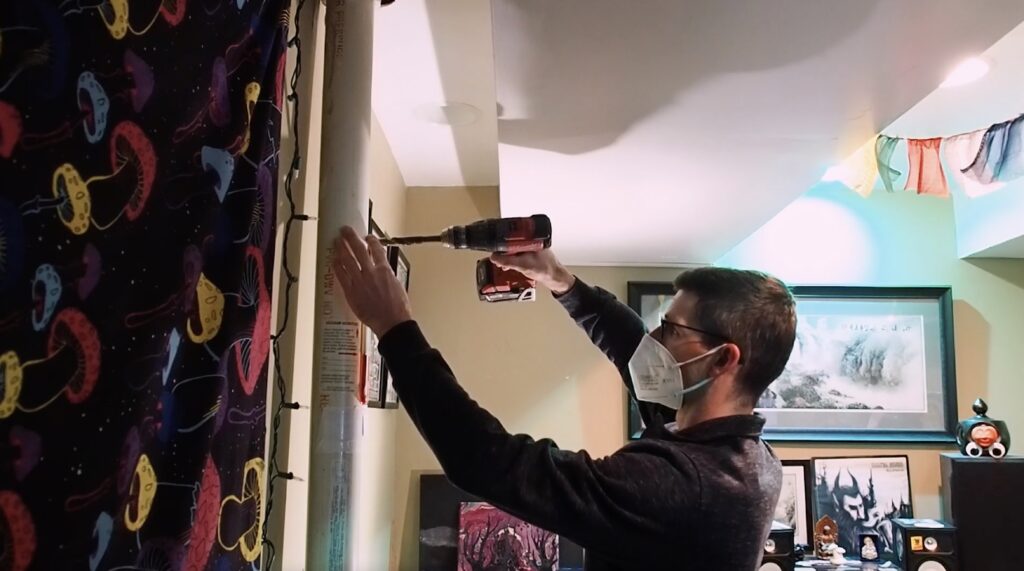 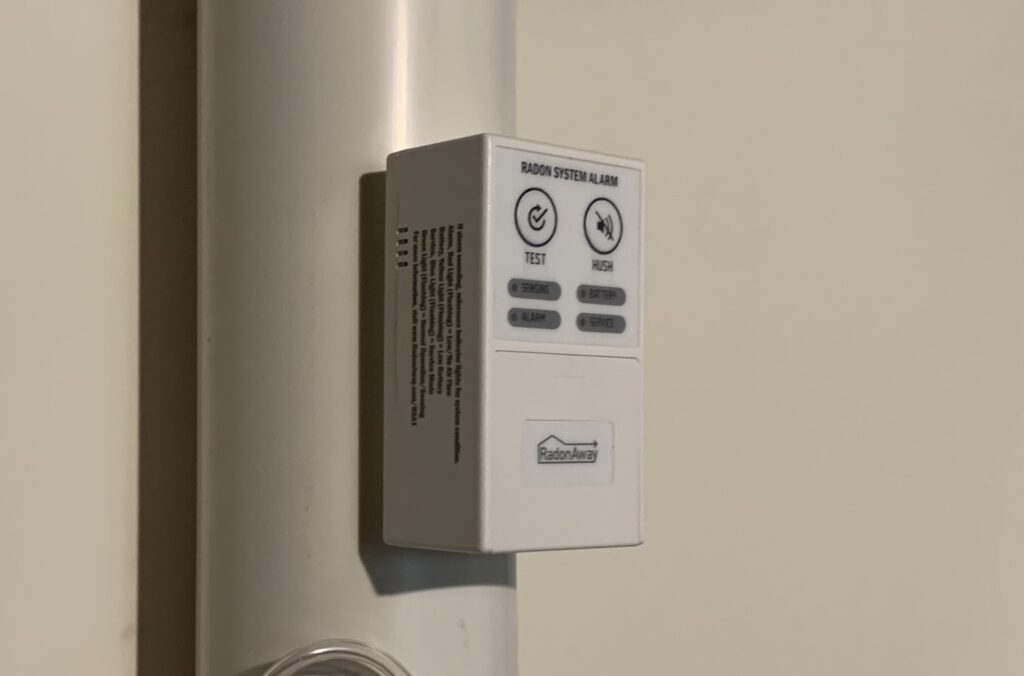 Next, we sealed the sump cover and added an access port. Sealing gaps to the soil like this is important because it creates more suction under the home. Sealing also prevents conditioned air from leaving the house, which lowers operating costs. 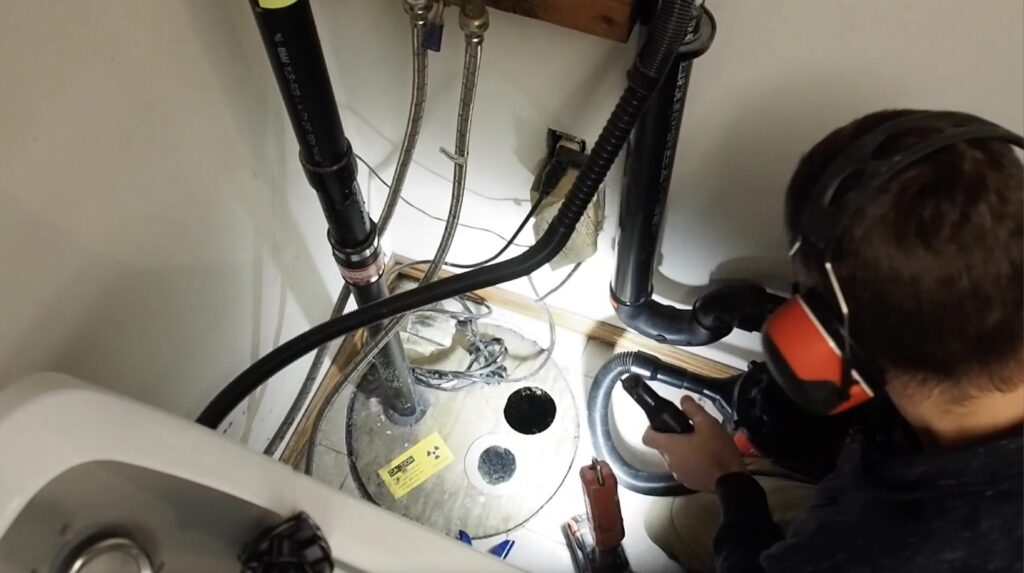 The next step was to measure pressure field extension to determine how much suction the system was creating under the home. Radon mitigation systems work by sucking radon-laden air out from under the house before it rises into the home. Therefore, for a radon mitigation system to be as effective as possible, it needs to create a vacuum under every section of the home. Any area of the house that lacks suction is a spot where radon can get in.

To test pressure field extension, we drilled small test holes into the floor. Don’t worry; we filled these in after we were done. We placed the first test hole as far away from the suction point as possible because that’s where the suction is weakest. This area of the home was finished, so to make the test hole as innocuous as possible, we drilled a quarter-inch hole through the grout between tiles. 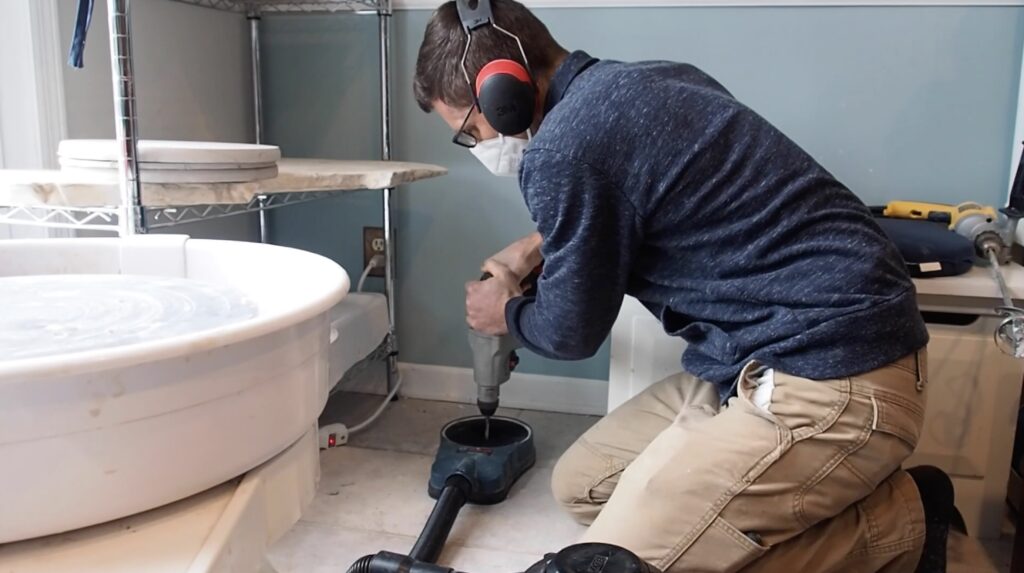 We drilled our next test hole closer to the center of the home. 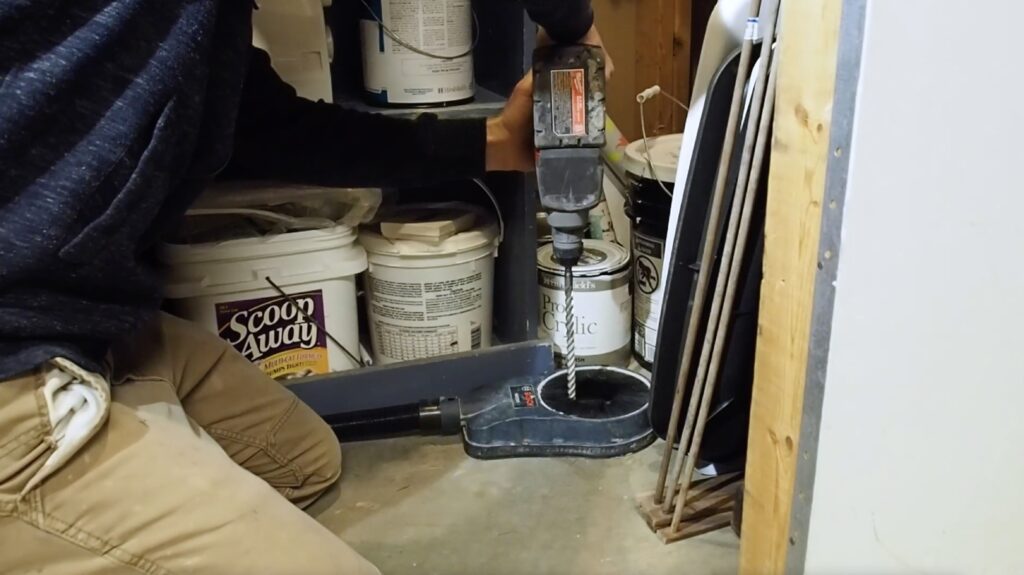 Then, we ran tubing from each of the holes to our micromanometer—a device that allows us to measure the amount of suction in each test hole. 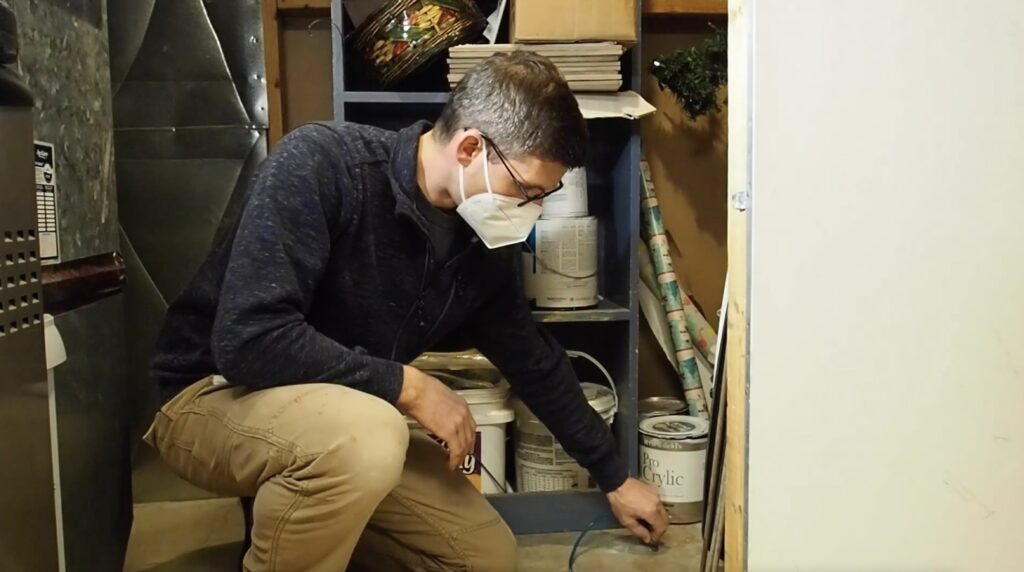 We turned on the radon fan and watched how it affected our micromanometer readings. Ideally, we want at least -5 Pa in each location. Unfortunately, we were not getting those numbers in either of our test holes. 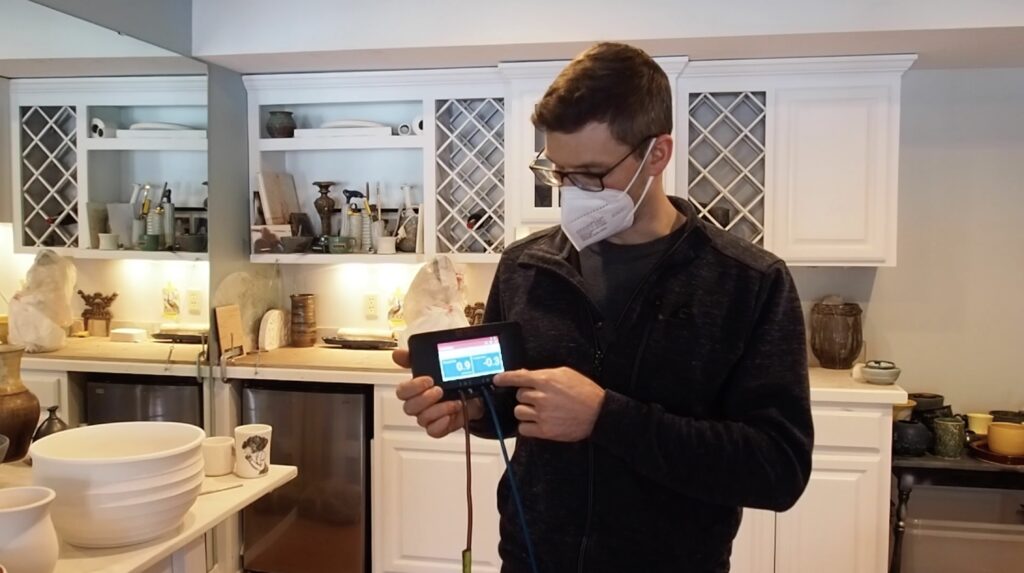 Next, we tried a larger fan cranked up to 10. The amount of suction in our second test hole went up, but our first and farthest test hole was still reading about 0.2 Pa. Positive numbers indicate a spot where radon can enter the home. To improve the suction under the house, we would need additional sealing. However, because this customer had a finished basement, doing so would be somewhat invasive. Since we would need to cut sheetrock to access the necessary areas. We talked to the homeowner and decided to wait and measure radon levels before taking that next step.

Lastly, we adjust the fan’s power. We had the large fan set to 10 and were moving about 130 CFM at 172 watts. At that setting, the operating cost of the system would be about $500 a year. (Click here to see how we calculate operating costs.) After talking with the homeowner, we decided to dial the fan back down to 80 CFM at 42 watts, which we estimated would cost about $200 a year to run. This lower setting seemed like a good balance between efficiency and effectiveness.

After installation, the customer tracked their radon levels with an Airthings Wave digital radon monitor for about six months. The long-term average was 0.7 pCi/L. The customer was content with this number and decided not to move forward with the additional sealing. However, should that change at any time, we will go back and take those next steps.

If your radon fan needs replacing, you’d like to optimize your current mitigation system, or you’re looking to install a new system in your home, feel free to reach out to us at 612-474-1004.